In the documentary Lost in La Mancha, it becomes apparent that the director of the film The Man Who Killed Don Quixote, Terry Gilliam, is himself a modern reflection of the literary character don Quixote. According to his coworkers, Gilliam has a certain cinematic vision for the movie and continually attempts to achieve the impossible, drawing his project out much longer than originally intended. A twist on the original novel, Gilliam adds an element of time travel to the plot, further layering the narratives involved. His specific vision for the movie is not always understood by his peers, similar to how don Quixote is misunderstood and often sees the world differently than others. One of Gilliam’s assistant directors describes Gilliam as “a little bit of a don Quixote,” since he is known as a dreamer and tends to see things much differently.

The crew having to leave Hollywood and relocate to Europe to film reflects don Quixote’s abandonment of his home to search for adventure elsewhere. Also, the entire project was grossly underfunded, remniscent of don Quixote’s lack of wealth and his ventures as a knight-errant in makeshift armor. Part of the issue with the budget was Gilliam’s desire to include several of the more elaborate scenes from the novel and the issue of condensing such a complicated novel into the script. This demonstates how the complexity of Cervantes’ novel made for an unusually difficult translation to a different medium of storytelling. Yet, Gilliam was as persistent with his vision for the film as don Quixote was about the reality of his delusions. Oddly, the actor too, who was supposed to play don Quixote, physically reflects don Quixote’s struggles because of his age and injuries that caused him to take a break from shooting and eventually cancel the movie production. 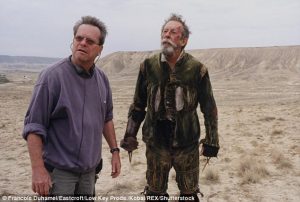 After all the time and effort spent on this project, however, Gilliam had to let it go and confront the reality that it was no longer going to be accomplished. In the film, one contributor comments that “reality won over don Quixote in the end”, suggesting that Gilliam was having to go through the same process and accept the fact that his vision only existed in his head and he was never able to manifest in the way he wanted to.

Both don Quixote and Terry Gilliam are dreamers who have trouble seeing reality, leaving the familiar to faces countless obstacles and do the unthinkable. Yet, as Gilliam concludes in a drawing, the “windmills of reality fight back.” He draws a visual parallel between himself and don Quixote to emphasize the way in which he sees things differently and the way in which he was ultimately conquered by his vision. 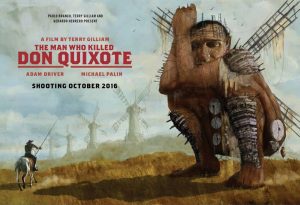 Despite the disappointing end to this documentary, it seems that Gilliam has finally suceeded in his quest. The movie The Man Who Killed Don Quixote comes out in theaters in 2018.