Benjamin’s blog post 11: An end to a really long book

This semester, the first of (hopefully) eight supplied me new incite on a book that is older than the country which I was born and many say is the first modern novel. I did not know what to expect of this course but it has set a high bar for teaching and learning.  Looking at the full list of the FSEM courses, Digital Don Quixote would not be my choice if given it, but if I could change now, I wouldn’t. My mom wanted us to listen to this very book in CD while on our vacation out west but I, along with my brothers, did not want to read a book with four hundred thousand words and that was written four hundred years ago. Professor Lewis has changed that. This class might be my favorite in this semester.

Don Quixote broke all stereotypes of a protagonist before stereotypes were a word. Cervantes has such a colorful way of portraying not just Don Quixote but Sancho, the Duke, the Duke and Duchess and more. My favorite aspect of Don Quixote is that he starts with a crazy idea and throughout the book, he maintains that vigor while also changing into a lovable character rather than someone who would charge at you because he thought you were a wizard or something. Don Quixote learns how to balance imagination and reality.

One quote that intrigued me was when Sancho told his wife in the beginning of volume two “I’m happy because I’ve decided to serve my master, Don Quixote… and I’ll leave with him again.”(Grossman, vol 2, ch 5). This not only shows Don Quixote’s change but also Sancho change as well. Sancho wants to be on adventures even if it’s dangerous and requires leaving his family. Another quote is from chapter three in the first volume involving Don Quixote’s knighthood “Having done this, [Don Quixote] ordered one of the ladies to grid Don Quixote with his sword, and she did with a good deal of refinement and discretion, and a good deal was needed for them not to burst into laughter”(Grossman, vol 1, ch 3). Don Quixote’s adventures have not started yet and people are already laughing at him and will continue to laugh until his death.

My favorite quote is not from a person but from a pen “For me alone was Don Quixote born, and I for him; he knew how to act, and I to write; the two of us alone are one…” (Grossman, vol 2, ch 74). Don Quixote was a fictional man, made from a pen with paper, but his ideas are not. People need a little of Don Quixote as well as Sancho in their lives; a little imagination can’t hurt but a lot will. 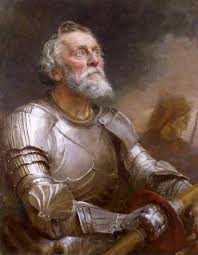