First volume Quixote is adventurous, risk-taking, and lets his madness straight from the start. Everything that was new to him had to be an evil mysterious demon or enchanter and as the knight of chivalry, he must protect the people from these horrible creatures by valiantly fighting them to the death. Don Quixote’s madness, however, slowly dies down, as in the beginning windmills were giants, sheep were an army, and Dulcinea was a beautiful noble to Don Quixote himself enjoying a puppet show and seeing that the puppets weren’t real. Don Quixote is the problem in volume one, more or less.

Second volume Don Quixote gets on the wrong end of the stick, as it is he who receives the problems from others. The big problem he is faced with is the Duke and Duchess. Don Quixote has built a world of imagination, but the Duke and Duchess turn the script around, making the foolish hero into a foolish fool. Don Quixote and Sancho are pranked constantly and one of the pranks was Sancho’s island governorship. The Duke and Duchess simultaneously give Sancho a virtually fake reality and giving Don Quixote a little more hatred to Sancho (he probably made up the island on the spot). The Duchess replies to Sancho’s letter his wife by saying “when he says or implies that this governorship has been given to him in exchange for the lashes that he’ll give himself…”(volume 2, chapter 36, Grossman). The Duchess is again making fun of Sancho about the lashes as well as Don Quixote believing the lashes will do anything.

The director of Lost in La Mancha, Terry Gilliam, experienced many complications a second volume Don Quixote would. In the second day of productions a huge storm wipes out the entire set, and the bright sun from day one contradicts the next overcast days which in the movie is supposed to be on the same day, showing the ill fated luck Don Quixote had meeting the Duke, Duchess and Sanson. Terry’s budget for the firm was much too low, similar to the beginning of Don Quixote’s journey. All these factors make the film unable to finish, however, Don Quixote persevered over his. Don Quixote made have been beaten over and over and over (which for a old man like him seems quite contrary) but he’s never going back to his boring life reading about knights, he’s going to be a knight, his knight. Not a perfect true knight from the books of old but the knight of Don Quixote, and no one can tell him otherwise. 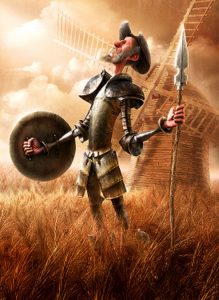