Cervantes repeatedly demonstrates the issues that can arise through the romanticism of reality. For instance in Chapter Twelve, Chrysostom’s fate seems to foreshadow the possible consequences of Don Quixote’s unusual endeavors. One evening Don Quixote is described as spending “the rest of the night in thinking of his lady Dulcinea, in imitation of the lovers of Marcela” (Ch 12). Don Quixote puts Dulcinea on a pedestal in the same way Chrysostom throught of Marcela, which led to his death. Because of their skewed perceptions of reality, both Chrysostom and Don Quixote are unsatisfied with their real ordinary lives, which always leaves them wanting more or, even worse, living in a fantasy world. Having first heard Chrysostom and Marcela’s story, it seems that Marcela is a to blame for leading Chrysostom on and torturing his heart. However, the reality of the situation is that Chrysostom has developed an obsession and has warped the reality of the circumstances. Additionally, Don Quixote follows her after she defends herself at the burial to offer his services. He assumes that she, being a lady, would need a knight to defend her honor and purity, when in reality Marcela is perfectly capable defending herself, as she shows through her eloquent and convincing speech. Don Quixote seems to think he is needed in many situations where he is not, reminding us of the incident where he tried to help the farm boy who was being flogged, only causing his master to flog him harder.

Sancho, too, lives unaware of reality, although less so than Don Quixote or Chrysostom, which can be seen during the events of Chapter Ten. Believing that they have won an isle in their most recent battle, Sancho genuinely expects to be a governer of the imaginary isle that Don Quixote has promised him. In fact, Sancho’s entire motivation for joining Don Quixote on his delusional endeavors was the promise of being governer. Yet, Sancho remains strung along by Don Quixote without much proof that his side of the deal will ever be met. This shows Sancho’s own instability and lack of logic, as well as his desperation. Sancho is so eager for the promise to be fulfilled that he neglects to fully consider its actual probablity of happening. Sancho is not completely exempt from the label of madman that is applied so often to Don Quixote, having left his wife and children to put himself in harm’s way for a presumably nonexistant isle. 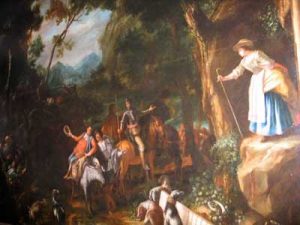