Of Bodily Autonomy/Integrity and Goodbyes

Controversial topics, even those that resonate contemporaneously, are not hard to find in the novel Don Quixote. However, I have found what could be the greatest scene depicting Cervantes’s views on bodily autonomy within the novel in these last set of chapters. This pulls at some very recent discussions on bodily autonomy that I’ve read lately, a topic that is much argued and has a basis on misogyny and religion.

Now, we see that don Quixote does attempt to whip Sancho in the spirit of disenchanting Dulcinea, “and the next words of the wizard Merlin about what had to be done to disenchant Dulcinea buzzed in his ears.” (Miguel de Cervantes, Don Quixote, 1605 & 1615, Chapter LX). This is him justifying in the name of someone else. Sound familiar?

Given that Sancho needs to whip himself something like 3000 times on his bare bottom yet had only whipped himself five times (to don Quixote’s knowledge), it’s understandable that don Quixote would get a little frustrated. However, “with this in mind, he took Rocinante’s reins, holding them so he could use them as a whip, went over to Sancho, and began to undo the cord -for the common opinion is that he had only one- holding up Sancho’s pants.”

That’s just… not the right way to go about things… at all. Beyond sexual harassment/sexual assault, this is a violation of Sancho’s bodily autonomy, with bodily autonomy/integrity being defined as: “bodily integrity is the inviolability of the physical body and emphasizes the importance of personal autonomy and the self-determination of human beings over their own bodies. In the field of human rights, violation of the bodily integrity of another is regarded as an unethical infringement, intrusive, and possibly criminal.” (Wikipedia)

Above is a very popular argument for bodily autonomy. In other words “my body, my choice,” as the slogan goes. Now, Don Quixote may not exactly be talking about abortions and pregnancy, but we see Sancho standing up for himself, defending his right to choose and where and even if he’ll undergo the lashes and don Quixote subsequently respecting that choice.

‘”I neither pull down nor raise up a king,” responded Sancho, “I am only defending myself, for I am my own lord […] Don Quixote promised him, and swore he would never again touch a hair on Sancho’s head, and that he would leave the matter of whipping himself whenever he pleased to his free will.”‘ (Miguel de Cervantes, Don Quixote, 1605&1615, Chapter LX)

And he stays true to his word… kind of. He never attempts to force Sancho to do it himself again but he does ask repeatedly, and even bribes him into doing so.

“With all this, it seems to me that it wouldn’t hurt to try. Sancho, figure out the price you want, and start whipping yourself right now; then you can pay yourself in cash with your own hand, since you have my money.” (Miguel de Cervantes, Don Quixote, 1605&1615, Chapter LXXI)

He does all of this yet he never again attempts to force Sancho into getting whipped again. He does, after a fashion, respect Sancho’s decision. An action that many people today can learn from.

On another note, this is my last blog post! I have to say, these blog posts were probably my favorite part of the class. It’s something I’ve never done before. Usually, when discussing a book, the teacher just leads a discussion in class but those are easy to derail. While writing blog posts, I don’t have to worry about getting derailed, I just present my topic! 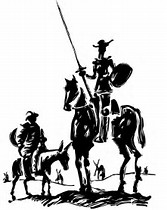 I think that I’ll remember don Quixote as someone who just never gives up and always follows his dreams. Sure, he’s exceedingly reckless and he definitely needed to rethink some things but his unwavering determination is a quality that I admire.

I’ll remember the class itself for the many skills it taught me when it comes to being a college student and how it afforded me so many opportunities to reach out to the resources we have on campus.

Overall, it’s been a ride, and I’m happy to have had this class as my FSEM (I’ve heard stories…)