We have reached to the second volume, indicating the midpoint of Don Quijote’s expedition. I noticed that drama is often being expressed. Cervantes unfolds various examples of drama. For instance, in Chapter 17, Don Quijote encounters a mule driver carrying two heavy beasts. It was a foolhardy move, but the chivalric knight wanted to challenge the lions in combat. I really don’t see the point in involving myself with lions. I used to see Lions at the D.C. Zoo. Like any other viewer, I was able to see their innocence and affection to their other linemates. Therefore, lions are a great deal of learning but pointless in engaging them. They are wildlife animals with effective and unique hunting skills. They can physically do more damage than I could possibly imagine. It’s best to not disturb the peace and let them be. Don Quijote, however, did the exact opposite.

” My dear good sir, your grace would do well to tend your tame partridge and your bold ferret, and not mind other people’s business. This is my affair, and I know perfectly well whether these lions have come after me, or whether they’re not. By God, you scoundrel, if you don’t open those cages as fast as fast can be, I’ll stick you to the side of the cart with this lance.” To reiterate, it was a foolhardy to involve oneself with lions. In this scene, they didn’t have any quarrel with Don Quijote. All I perceive is a man inviting trouble which would give a knight, based on his ideological belief,  a purpose.

” About seventy or eighty feet down in this dungeon, on the right-hand side, there’s a large hollowed-out space, big enough to hold a cart and a team of mules. When I saw this place I was already tired and fed up with the dangling at the end of the rope and descending slowly into the darkness below, not knowing where I was going, so I decided to climb in and rest a bit…And then I saw a sumptuous royal palace or castle with walls that seemed to be fashioned of some clear, absolutely transparent crystal. “

What makes it funny is a middle-aged man is able to grasp again his castle and the old man ( Montesinsos), saying it was a total of 3days  when in reality it was ” less than an hour.” (Sancho Panza replying, Volume II, Chapter 23, The chivalric is unable to recognize his errors of leaving in an illusion but is able to recognize a vivid event that only occurred for a short while.

In Camilo’s wedding in Chapters 20 through 22,  love is understood in terms of wealth until the authentic definition is found. Everything is arranged of Quiteria to marry Camacho the rich. However, Basilio comes out in surprise and persistent for the sake of love. The scene of taking his life with a sharp blade portrays that he is willing to sacrifice himself for the good of the other person anytime.   I think that’s what how love is defined. Loving is a way of renouncing oneself and focus on another. 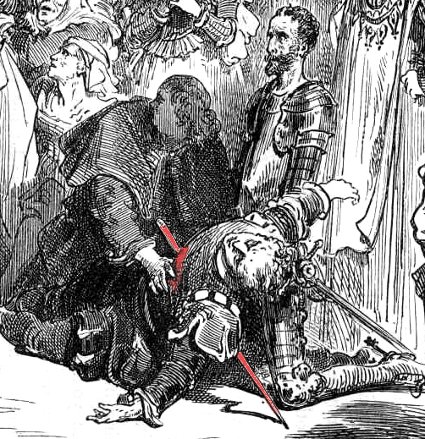 Regardless he didn’t fully stab himself, there was a great manifestation of dying for a good cause.

Whatever enlightens a reader makes them want to dive deeper into the depths of  Don Quijote’s novel. The scenes have a way of extending the novel with a few more actions than words. Furthermore, it builds my curiosity which makes me want to investigate more of the moor’s and Cervantes’s work.

The other day in class, my group enhanced our time in working in piktochart. This online tool is a gateway in enlightening our group project to success. I never about the program and its ability toward infographics. Powerpoint and Prezi are great tools but that are practical. I have no doubt that something anew will harm our performance and for future seminar students in this course.