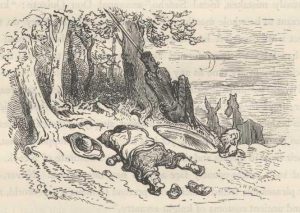 After being beaten up by the Yaguesans, Sancho and Don Quixote could not get up because they were badly hurt. Don Quixote spoke about him and Sancho not being dishonored because they had not been defeated with swords, they had been beaten up with walking sticks (which I believe is worse). Sancho kind of ridicules Don Quixote’s honor talk by saying “there is a great difference between going mounted and going slung like a sack of manure” to whatever resting place they found (Chapter 15). After having been hurt so many times, Sancho is getting tired of Don Quixote’s Chivalry stories and rules. This becomes very obvious. Sancho is still loyal to Don Quixote though because instead of calling it quits right then and there, he forces himself up, picks up Don Quixote and puts him on his donkey and leads them all the way to the inn. On the way to the inn Sancho was telling Don Quixote that it was an inn, not a castle. In a way this sounds like the relationship between a father and a son. Sancho having this love and loyalty to Don Quixote continues to play along with Don Quixote’s fantasy even though he doesn’t want to and knows its not real.

When Sancho and Don Quixote arrive to the inn, Sancho sounds fed up with this game of Knights. When asked what happened to them, Sancho lied saying Don Quixote had fallen off of some rocks and that he himself had gotten hurt by just watching Don Quixote. So there we see that Sancho understands that no one believes their knight stories so he doesn’t want to fully explain what happened. He does end up telling them who Don Quixote is and that he’s a knight, and he very briefly explains what a knight errant is. All of  that to me seemed to forced, unlike before in the story; Sancho would always introduce his master with a serious almost exited tone. Sancho still tucked his master into bed and later got him the things he needed to make his magic balsam. It was obvious that he was exhausted, but he still put Don Quixote’s needs first. 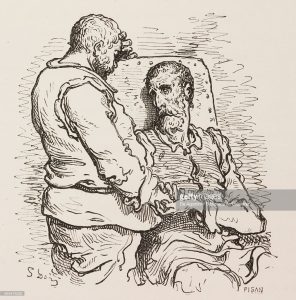 Sancho does not want to continue his adventure with Don Quixote because he feels he’s always in danger and he’s tired of it. The gross parts of the job also make him want to give up his island and glory. After the Sheep battle, Don Quixote thought he had lost teeth and asked Sancho to check. Loyal, faithful Sancho went in real close to count his teeth and Don Quixote threw up all over his beard. Throughout the entire novel so far I really believe Don Quixote has little appreciation for Sancho while Sancho has been taking care of Don Quixote since the beginning. I find this to be very disrespectful to Sancho, and Sancho thought the same way apparently saying  he said he was going to quit and go home, but he still went right back to Don Quixote and put his fingers in his mouth to count his teeth.

All the misfortunes Sancho and Don Quixote come across hurt both of them. The difference between these two men is that Don Quixote enjoys being beat up and continues to find ways to get beat up some more, whereas Sancho is always looking for a way to avoid violence and never gets a break. No matter how angry this makes Sancho, he’s always there to pick Don Quixote up after his next injury. Sancho is always willing to meet every singe one of Don Quixote’s needs and puts them before his own. Sancho can not handle this any longer though and hopefully within the next few chapters Sancho figures out a way not to get hurt and too caught up in the action but still be able to get his island. 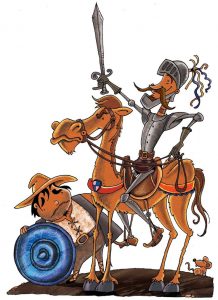