Upon beginning to read the second part of the book, I have been taken by surprise. It’s like the characters are wolves wearing sheep’s skin. In other words, they are brand new characters hiding under the guises and names of characters from the first part.

This is especially apparent when don Quixote doesn’t attack the theater actors dressed as demons and devils.

“‘On the faith of a knight-errant,’ responded don Quixote, ‘when I saw this cart, I thought that some great adventure was awaiting me, but now I say that you have to touch appearances with your hand to let the truth come through.'” Miguel de Cervantes, Part 2, Chapter 10, 1605 & 1615

There have been times before in the text when don Quixote thought he saw evil but even when confronted with the truth, he would not listen. From the very beginning, he was curious, not exactly convinced as to the villainy of such peoples. Not only that, but he also listened to what he was told and accepted it.

Quick throwback to the giants (windmills), the kidnapped princess (she was being escorted by fryers), and the two armies (the sheep).

‘”Look, your grace,” responded Sancho, “those things that you see over there aren’t giants – they’re windmills…”

Don Quixote isn’t the only character that has seen some drastic change. Sancho Panza is now an educated man. Or at least, he tries to pass off as one. The argument can be made that he’s merely adapting his speech to how don Quixote talks, being more like him due to being in close proximity with him so often.

Regardless, Sancho speaks in such a way as to appear like a man of literature.

The man is even adapting proverbs!

In keeping with his ever-advancing vocabulary and grammatical skills, Teresa offers us undeniable proof through some wise words.

And again a little further down.

Whether this is character development or the effects of the sequel taking 10 years to be published, the fact of the matter is that these characters are not the same as they once were. 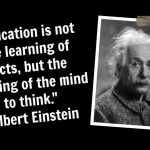 As Albert Einstein once said, “education is not the learning of facts, but the training of the mind.” Both don Quixote and Sancho Panza are both becoming smarter men, not because they are learning new facts, but because the situations that they face force them to grow, to think and train the mind. This, I believe, is the driving force behind character development, and what Miguel de Cervantes is using to further the growth of his characters in the second part of the story.