Through Don Quixote’s encounter with the lions in Chapter seventeen, Cervantes implicitly makes a political statement about Spanish nobility. Although discreet, Cervantes suggests that there exist several parallels between Spanish nobility, specifically the king, and the lions which don Quixote interacts with in this scene.

From the outset, the lions are described as being lazy and uninvolved. After the lion keeper first opened the cage, “The first thing the lion did was to turn around in the cage, where he’d been lying, extend his claws, and stretch all over. He opened his mouth wide and yawned very slowly, and with a tongue almost a foot long, he licked the dust from his eyes and washed his face” (629). Despite Don Quixote’s readiness to fight it, the male lion seems completely disinterested in him. This indifference can be interpreted as a metaphorical criticism of the king as being arrogant and unconcerned about lower classes and marginalized members of society, like don Quixote. 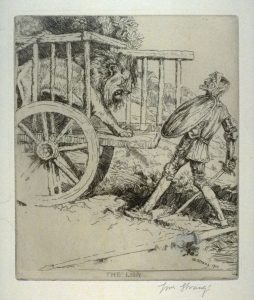 The lion is also described as being “indifferent to all this childishness and bravado, after having looked all around…turned back, showing his rear end to don Quixote, and with great apathy and sluggishness, returned to lie down in his cage” (629). Cervantes symbolically implies that the Spanish king and queen are lazy and indifferent to their citizens, through the parallel he creates with the lion scene. Lions have been traditionally associated with Spanish nobility and placed in throne rooms as sculptures with a paw resting on globe. This is one of the instances in the novel that contributes to critics suggesting that Cervantes is makes revolutionary political statements throughout his seemingly casual storytelling.