How will I remember the story of Don Quixote? I will remember it as one of the strangest, but good stories I have read and learned about. Before I joined this FSEM, I was very skeptical what I could learn about the very old story of Don Quixote. I will say that it did prove me wrong, it was much better than I had expected. I guess some could say I am like the Duke and Duchess. Nonetheless, I am glad to have learned this story and will certainly always remember it.

In Ch. V, Don Quixote says, “I know who I am.”(Cervantes, Don Quixote) I think we all have this belief in ourselves, whenever we start a new adventure. Before I started college, I thought who I was. But over this semester, I learned more about myself then I knew. This is the same for Don Quixote, he did learn a lot about himself. And he had to endure lots of adversity, but he didn’t quit. Very similar to college, there is lots of work and it is much different from high school, but the goal is to not give up.

At the end of Ch. XLII, Don Quixote is giving advice to Sancho about his govern-ship and says, “”By God, Sancho,” said Don Quixote, “for those last words thou hast uttered alone, I consider thou deservest to be governor of a thousand islands. Thou hast good natural instincts, without which no knowledge is worth anything; commend thyself to God, and try not to swerve in the pursuit of thy main object; I mean, always make it thy aim and fixed purpose to do right in all matters that come before thee, for heaven always helps good intentions; and now let us go to dinner, for I think my lord and lady are waiting for us.” (Cervantes, Don Quixote) Cervantes wants us to always have good intentions and I believe this is one of the best quotes from the story of Don Quixote. When Don Quixote was giving his list of advice to Sancho, I believed it was all very important. If humans all around the world acted with good intentions and tried everyday at them, the world would be a much better and safer place. But that is the magic of fiction, because while so many people believe fiction to be fake, it is still the truth of our society and by reading fiction books like this, we become better for the whole of society.

What will be the most I remember from this class in 5 years? Two things: It is never to late to chase a dream, and dreams are reality. I will cherish these two quotes, and use them for the rest of my life. Don Quixote has been a crazy story, but life is a crazy story. While reading it was tedious at times, and also confusing at times, our lives are if not more crazy than this. This book was a great read for the start of our college adventure, and while we are only at the windmill scene now, we are already writing our masterpiece. While we will grow up and surely live all very different lives, we should all listen to Don Quixote and dream, live with good intentions, and never give up. 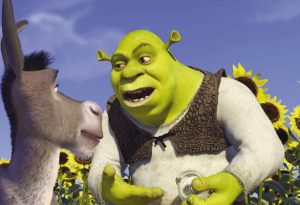 (credits to the Gohidalgo media page)

Don Quixote reminds me of Shrek. He influences everyone around him so positively, and that is what Quixote does. He brought out the complete best in Sancho, very similar to how Shrek brought out the best in Donkey.