Don Quixote is a very complex character to me in the readings we have been studying. But this statement begs to have the question asked, is he a hero or a fool?  To come up with the answer to this question, you have to ask yourself if the deeds Quixote does are actually beneficial or do they do more harm than good. Although Quixote may think he is doing a great amount of good, in reality he is either being made fun of, or doing things that are very unhelpful to the majority of the people he is helping.

Based on the stories we have read so far in volume 1 of Don Quixote, I would have to determine that Quixote is more of a fool that he is a hero. Quixote seems to cause more harm and chaos than he does good deeds, although his intentions truly mean better. Quixote is also very gullible and has proved so throughout the novel. One Example of this is in chapter 46 when The Priest and the barber dressed up and made a cage to transport Quixote. “They made a cage with wooden bars, large enough to hold Don Quixote comfortably, and all the servants of don Luis and the officers, together with the innkeeper, cover their faces, and disguise themselves in different ways, so that Don Quixote would think they were not the people he had seen in the inn.” This very amateur plan cooked up by the priest and the barber was very far-fetched and proves that because this plan worked, Quixote is obviously leaning more to the fool side of the equation.

Although Quixote is arguably a fool in the first volume of the novel, in class we discussed the outcome that Quixote might have a certain change of events in the near future. Hopefully this outcome is soon because I very much look forward to seeing a different side of Quixote, one that we as readers have yet to see. Maybe Quixote actually genuinely helps people, and becomes able to think for himself better and become more aware of his surroundings and what people actually think and want from him. This idea is very intriguing to me, considering the Quixote we have known so far is the complete opposite of the characteristics previously listed. I believe it would be a great job by Cervantes if he switched up Quixote’s characteristics in order to keep the reader interested and in check. 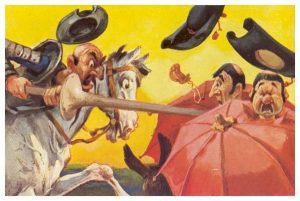