While reading Don Quixote, I often think back to a memory of when I was a little boy and saw a butterfly struggling to get out of his cocoon. I was about to help when my parents stopped me and told me that I was going to hurt the butterfly because he needed to struggle to get out to make himself stronger and ready for flying. Don Quixote one day decided to be a knight. He is older man in his fifties, how much can he actually help people?

In our class reflections we discussed if he was helping people or only making the matters worse for them. While it seems he’s only putting more people in danger. I believe he still is a hero. In every situation he looks at it optimistically. He lightens up the people who surround him. An example would be when he is speaking to the inn keeper, and calls him Sir Castellan. The inn keeper is surprised but very joyful that Don Quixote is calling his inn a castle.

“Don Quixote, observing the respectful bearing of the Alcaide of the fortress (for so innkeeper and inn seemed in his eyes), made answer, “Sir Castellan, for me anything will suffice, for ‘my armour is my only wear,
my only rest the fray.'” (Don Quixote, end of chapter 2)

Other examples would be of Quixote speaking politely to the prostitutes. He speaks to them as ladies, not just as whores. He also promises his Squire Sancho an island and to be even more than governor. Sancho is unintelligent, but Quixote thinks the world of him. He is more than confident in Sancho. 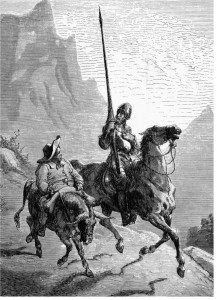 Quixote now in the story wants to help the beautiful Marcela. A very charming women but she refuses to marry, so people think she is cold-hearted. After the funeral of a shepard-student who had loved Marcela, several of the men try to follow her. Quixote bravely defends her saying he will kill anyone who follow her.

Don Quixote may be too old of a knight, but while reading his books of chivalry, one day he decided he wanted to save people. It was his “Call to Adventure” from the Heroes Journey. His optimism in people brings out the best of them. While monks pray all day for God, the knights execute the will of God. He could of stayed in his house as a middle aged man and continued living decently. He left his ordinary life for the chance to be something more. There are no guarantees he will succeed, but that is why he is a genius. He doesn’t look at the odds, he believes what he will do, and accomplishes it.