In Don Quixote’s time, weddings were the prime time of today’s entertainment. The wedding itself would last up to a week of celebration. Marriage for the rich was very different from the poor. Wealthy people married wealthy people, and their spouse was usually chosen by the parents. The poor had more options, choosing love over money in importance. Camacho was a wealthy man and the like a party, the rich go all out.

And by all out, have “more than sixty wineskins”, “six pots …, each one large enough to hold entire sheep”, and “cooks numbering more than fifty”(Grossman), and you can imagine Sancho’s reaction. Sancho is relatively poor so just looking at the food was almost a dream to him. The generous of Camacho is also shown as he “took out three chickens and two geese and said to Sancho: ‘Eat my friend…'”(Grossman), however, wedding and generosity go together well, but it’s interesting seeing someone looking half sane.

You can also imagine Don Quixote entering the wedding: himself, but slightly quieter. After the daily insult “you glutton”(Grossman), Don Quixote does not talk until the men praise the fairness of Camacho’s betrothed. It can also be assumed that Don Quixote did not eat much considering all the remarks about Sancho’s eating habits.

In chapter 21, the chapter after the events before, Sancho gets rather poetic about Quiteria, Camacho’s bride”… like some fine court lady; egad, as well as I can make out, the patena she wears rich coral, and her green Cuenca stuff is thirty-pile velvet; and then the white linen trimming- by my oath, but it’s satin! Look at her hands- jet rings on them! May I never have luck if they’re not gold rings, and real gold, and set with pearls as white as a curdled milk, and every one of them worth an eye of one’s head! Whoreson baggage, what hair she has! if it’s not a wig, I never saw longer or fairer all the days of my life. See how bravely she bears herself- and her shape! Wouldn’t you say she was like a walking palm tree loaded with clusters of dates? for the trinkets she has hanging from her hair and neck look just like them. I swear in my heart she is a brave lass, and fit ‘to pass over the banks of Flanders.'”(John Ormsby). This isn’t the Sancho in the last volume 1, or even in the first sixtenn of the second. Never has Sancho said anything like this before. Is Sancho trying to be like Don Quixote? I think yes. Sancho sees that what Don Quixote has made him whether he wanted it to happen or not. Don Quixote has given Sancho a life. If Don Quixote had grabbed a different short guy to go with him on his journey, Sancho would have lived a very boring , uneventful life where he did the same thing everyday until he died. Sancho is taking all this in and knows that the only person that could give him this is Don Quixote. 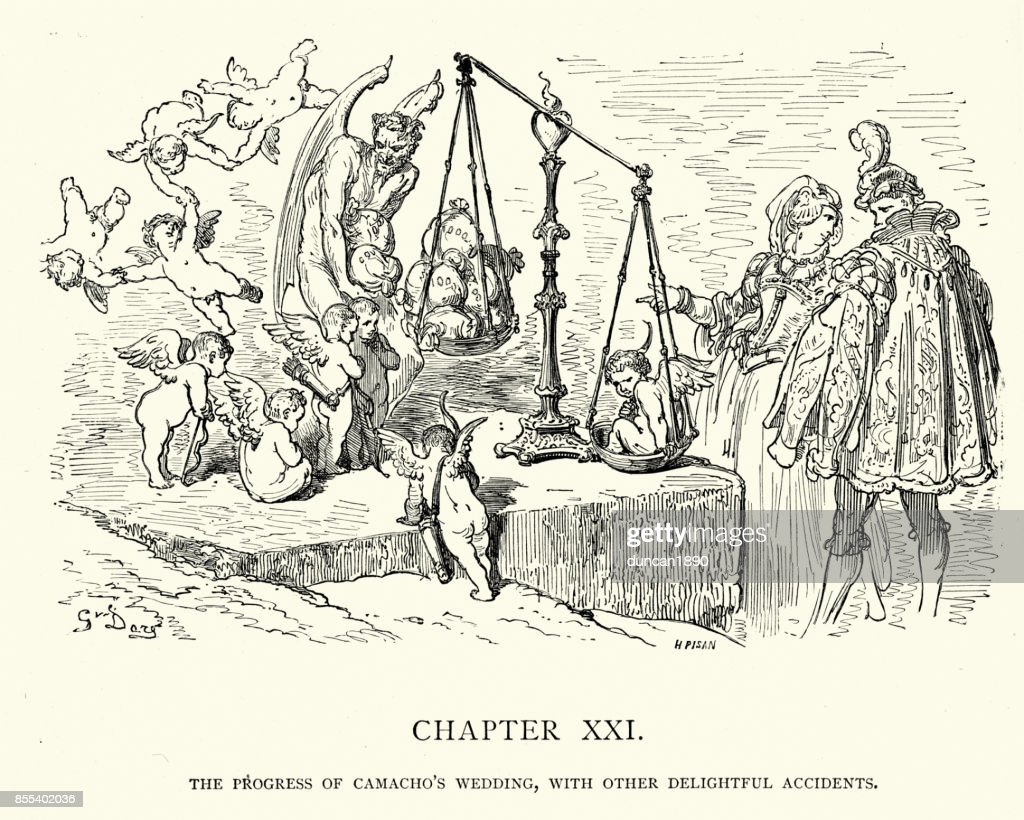