Benjamin’s Blogpost 5: A final word on insults and a bit on compliments

There are a lot of insults in Don Quixote, most of them said by Don Quixote to Sancho. But what is the reason behind all the insults? One reason in my opinion is that the book Don Quixote is a comedy, and Cervantes uses constant insults to add humor. Another might be to show how crazy and insane he is by calling people something else. These reasons suggest what Cervantes was doing, but the book itself will explain with more accuracy.

Don Quixote insults Sancho a lot, and I believe there are two reasons why he does so. The first is because he thinks he is right and Sancho is wrong. Quixote thinks that he should criticize Sancho to help him see that he is right. The problem: he’s never right, he sees what he wants to see. The friars are a good example of this. Sancho says “Look, Senor, those are friars of Saint Benedict…” which Don Quixote replies “I have already told you, Sancho, that you have very about the subject of adventure…”. Don Quixote thinks Sancho is wrong.

The second reason of Don Quixote’s insult might be because he wants to look for adventure. Don Quixote has a mid-life crisis and he wants to be a knight, and save the princess. However, there are no princesses to be saved and no enemies to fight. The solution: make them. He made Dulcinea a princess, the friars evil enchanters and army of sheep an army of man, but only in his eyes. Why shouldn’t he call them for what they are, good or bad? The encounter with Dulcinea shows this logic, however it’s more of a compliment Don Quixote gives, but it has the same principle as an insult.  On Don Quixote beginning adventure, he sees the first girl, and he being a noble and valiant knight assumed she was a noble princess.

Compliments also have a large role. The Narrator begins each part with “Part 1 of the ingenious gentleman Don Quixote of La Mancha”(Grossman). Ingenious means cleaver, original, and inventive, and that’s a lot to say for someone who killed seven sheep and would pay at the inn because it wasn’t a castle, but if you think about it, it’s kind of true. All the creatures are made up, Ducinea not a noble and the sheep aren’t an army, but Don Quixote is having his adventure and it’s not made up. He’s experiencing life in a a different way and that’s inventive. He creates his own atmosphere, and that’s original. He manages to keep himself and Sancho alive throughout the first volume, and that’s cleaver (I do have to admit, Don Quixote ability to not died is probably used more for humor by the author and not because he is smart, but because there’s no real proof, we’ll assume he’s responsible) . I said earlier that no one has said anything nice about Don Quixote, but I forgot the narrator . I actually thought the narrator said ingenuous instead of ingenious, and I was going to use that to use to support the idea that Don Quixote was not very liked or wanted, but maybe he is, just not on the outside. Maybe Don Quixote is actually forming this odd team with Sancho and other people. Don Quixote might be more helping than hurting, and that’s why Don Quixote took a break in the end of the volume, because he wanted to give Sancho his life back, to be with his family, and to also help himself heal. 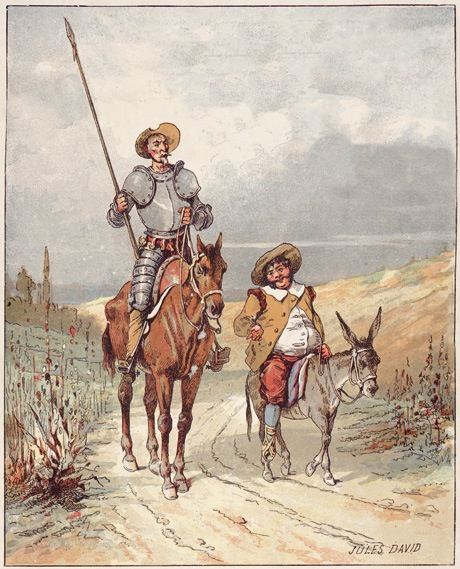