Although Don Quixote seems to have all the qualities of a madman, his ultimate goal is not unique in that he yearns for glory and a legacy, instead of fading into oblivion, which is not an uncommon desire among humans, especially as they become older. Because of this desire, Don Quixote abandons his sanity and decides that he “would put into practice everything he’d read that knights-errant did, redressing all kinds of wrongs, and by putting himself at risk and in harm’s way, he would achieve eternal renown and fame” (23). Don Quixote’s fear of oblivion outweighs his sense of reality and, in a way, drives him mad. Similar instances can be found in modern times, such as celebrities exploiting themselves in order to chase after fame, losing their own values and sense of self in the process. 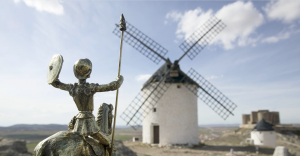 In Don Quixote’s pursuit of fame, both his grip on reality and time waver, as he mentally travels back to medieval times and mirrors the heroic quests he obsessively reads about in his many books of chivalry. He even goes so far as assigning himself a new name as a means of escaping his lowly identity and create a seemingly more prestigious one. This is, of course, ineffective because rather than being perceived as a heroic knight-errant, he is labeled a madman. This is seen in the following excerpt: “So, having lost his wits, [Don Quixote] came up with the strangest idea ever concocted by a crazy man, and that was that he thought it right and necessary, both to increase his honor and serve the republic, to roam the world on horseback, dressed in his armor, seeking adventures” (23).  Don Quixote is called “a crazy man” and a man who has “lost his wits,” because of his attempt to alter his legacy and his identity.

I, like Don Quixote, considered changing my name before college. My full name is Eleanor, but I have always been called “Nell.” I thought about going by “Ellie” in college, simply because of the ease it provides in introducing myself; people often take multiple attempts to learn that my name is “Nell” when I introduce myself, probably due to the brevity and indistinctness of the name. Unlike Don Quixote, I was not attempting to change my whole self or completely alter my identity. In the end, however, I decided not to go by “Ellie” because it did not feel like me when I heard it. I discovered that my seemingly trivial nickname is actually essential to my identity, and although it often creates trouble with introductions, that slight disadvantage is not worth sacrificing my sense of self.