The majority of posts on Twitter in regards to Don Quixote represent art, ballet, and literary history.

The account @LearnArtHistory has frequently posted works of art depicting scenes from Cervantes’s work, as seen in the image below. 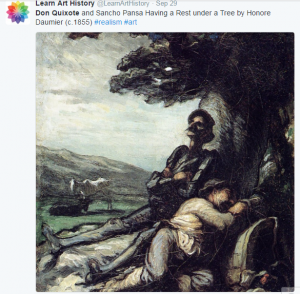 Gifs and images of the Don Quixote ballet also come up, such as this gif from a rehearsal at Royal Albert Hall – showcasing the wide reach that Cervantes’s story has in the artistic world.

Of  course, extraneous materials came up even in the “Top Tweets” option – such as accounts utilizing the name “don Quixote” in their handles, or odd works of fan art or comics. Posts are not made terribly often about the story. 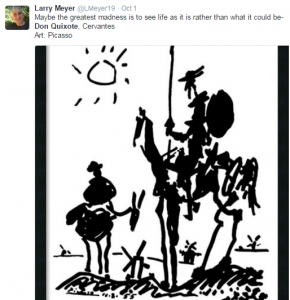 To add to Don Quixote’s twitter presence and further increase dialogue among the public, an account gathering details about Don Quixote from multiple artistic mediums could be gathered. Further, attempts to revitalize fervor for a potential Don Quixote movie could be made, such as with a fan account, or the use of hashtags. The movie was not made due to lack of funding, so fundraising efforts could be made using social media.