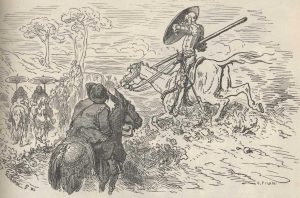 Don Quixote, throughout the course of this novel so far, has not proven to be a changing, dynamic character. Yes, he’s out for adventure and to kill, which would seem to make him this interesting character that is going to learn from all these mistakes he’s made, but that is not what we’ve seen so far. These adventures Don Quixote encounters are physically demanding and most of the time harmful to Don Quixote, yet, Don Quixote doesn’t learn his lesson. Even when told that his lifestyle doesn’t make sense, Don Quixote doesn’t retain the facts presented to him which in turn doesn’t allow Don Quixote to grow and advance past his insanity.

Resuming the big cliff hanger the narrator left us on in the end of chapter eight, Don Quixote was getting ready to slice the Biscayan’s head off. They were in this standoff and one was waiting for the other to throw the first punch. When the fight did begin, it started with the Biscayan slicing off half of Don Quixote’s ear! This angered Don Quixote, but Don Quixote spared the Biscayans life. He spared it with the condition that the Biscayan present himself to Dulcinea and let her decide what he does next. 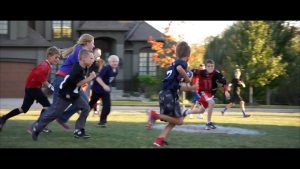 This is frustrating to read because the first few adventures Don Quixote has had up until now were almost harmless compared to this one. In this fight, Don Quixote actually had part of his body torn off of him! He’s actually been hurt, but he is still living in this little fantasy world he’s come up with. As soon as this fight is over, Don Quixote sends him to Dulcinea as an offering of some sort. This can be compared to little boys playing football; it is all fun and games up until one little boy sprains his ankle, and the whole game is over. Don Quixote, it seems, will never get past this insane stage of his life because no matter how big the blow, he doesn’t get knocked into reality. Don Quixote could sprain both of his ankles and continue on with the game because he isn’t in a complete state of mind and insists on living in this made up world with a fake identity.

This identity is also demanding for Don Quixote because he loses sleep on many nights because he thinks he needs to stay up thinking about Dulcinea. He also doesn’t eat as much as he should be eating because he thinks “it is the glory of knights-errant to go without eating for a month”(Cervantes, Chp. 10). These small details could be contributing to Don Quixote’s insanity, like drinking sea water, these things could be messing with his brain. Or maybe he knows what its doing to him and he just doesn’t want to leave his fantasy world. 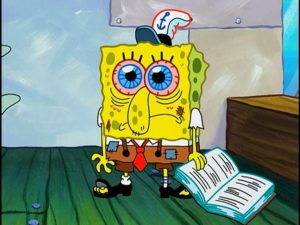 Don Quixote defends his fantasy even when the counterargument makes sense. With the traveller on the way to Chrysostom’s funeral, the traveller is basically preaching to Don Quixote. The traveller questions why knights don’t commend themselves to God rather than their ladies before dying. Don Quixote’s simple response was that there was no other way, it had to be like that just because the books said it. Then, the traveller pulled out chivalry texts that Don Quixote himself knew, like Amadis de Gaul’s brother not having a lady to be in love with. The traveller went as far as saying, that knights weren’t even actually in love with their ladies. All of these arguments presented to Don Quixote still didn’t help him grow at all. Don Quixote was stuck in his ways and maybe even Sancho because he “thought that what his master said was the truth”(Cervantes, Chp. 13).

It is obvious that Don Quixote could be suffering with mental health issues, but even with that, Don Quixote isn’t a normal, complex character like readers normally see in other books. Don Quixote is the main character of this story, but he doesn’t allow himself to learn from his mistakes, therefore, as of right now he is not a dynamic character. Don Quixote doesn’t feel the heat from the fire so he continues to burn himself. Hopefully later on we see that Don Quixote realizes that getting beat up isn’t what he wants for himself but either way this man is insane and will do what he wants to do as we’ve already figured out.