This past week in class we were put into groups to analyze chapters using digital tools. My group decided it would be a good idea to analyze the number words were said in chapter 17. Our findings showed that Cervantes used lots of words with negative connotations parallel with madness. Mad* was used 13 times in this chapter. Words like anger, wild, battle, fierce, and trouble were mentioned twice. Cervantes is using these negative words bluntly to show the reader, not only is Don Quixote mad. Cervantes understands the readers will form their own opinions that Quixote is crazy, so he is clearly stating it to expand on the characters instead of only Quixote.

From my critical review I wrote, “While Don Quixote is mad, many of the other characters have states of madness also. Álvarez states, “In fact, while all the characters in the novel may say that Don Quixote is mad, few are free of some degree of madness, and those who are free of it are guilty of a vulgar sensitivity. Who sets the tone for normality? Sancho? Sancho, apart from becoming Quixotized, is himself a carnivalesque figure. As for the priest, the barber and the bachelor, though reasonable men, they trust more in fiction to save Don Quixote than in sound reason. Of the innkeepers, Juan Palomeque believes in novels of chivalry (I, 16). What can we say of the Duke and Duchess, who live by appearances (II, 30)?” With the inclusion of many dynamic characters, it is very clear that this story is much more than a parody of chivalry.” 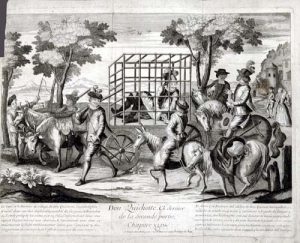 Why is Don Quixote referred to as crazy all the time? In the beginning of Chapter 17, a gentleman is speaking to Sancho about Don Quixote. “Is your master then so mad,” asked the gentleman, “that you believe and are afraid he will engage such fierce animals?” (Cervantes, Don Quixote) Quixote wants to change the world for the better, and as of now the world isn’t. Spain surely has lots of problems with the government, inquisition, and social problems. But Cervantes writes the story of Don Quixote to expand past the story or Spain. The entire world has many problems, and when someone tries to fix that they are looked at as odd. While Don Quixote lives in his fantasies of being a knight, it’s a reality for all of the characters around him. If Quixote never brought Sancho along then he would never of learned such a large vocabulary from Quixote.

At the end of Ch. 17, Don Quixote says to Sancho, “Don Quixote roused him from these reflections and this soliloquy by saying, “No doubt, Senor Don Diego de Miranda, you set me down in your mind as a fool and a madman, and it would be no wonder if you did, for my deeds do not argue anything else. But for all that, I would have you take notice that I am neither so mad nor so foolish as I must have seemed to you.” (Cervantes, Don Quixote) This shows that Quixote actually sees appearances now. In the first part of Don Quixote he confuses things on appearances. An example would be when he thinks windmills are giants. Or when he thinks a herd of sheep are soldiers fighting. This shows a serious change in Quixote.

With Quixote going through this major change, and understanding Sancho might think he’s mad due to the way he has acted in situations; shows Cervantes adding to this overall theme. People who want to change the world are not crazy at all. Nor is Sancho, for believing in someone’s fantasy and turning it into a reality. Cervantes is adding to the relationship of the reader, author, and characters.