In class we watched the movie documentary Lost in la Mancha. The director of the movie gave his absolute all, but it seemed everything was against the making of the movie. This can be very similar to the story of Don Quixote. It seems everything is stacked against Quixote to become a knight and live his fantasy. Don Quixote doesn’t give up, and continues to spread his influence.

Throughout the story of Don Quixote, he’s had a hard time. Other than getting beaten up, the only character that believes he’s a knight is Sancho. Quixote wants to be a hero and save the world. He wants to be recognized. This is very interesting because Sancho seems to want to help people without recognition.

At the end of Part II Ch. XLV, When Sancho was elected major immediately he was faced with problems. He acted extremely wise and the crowd was surprised. “Sancho set himself to think for a moment, and then said, “It seems to me that in this case it is not necessary to deliver long-winded arguments, but only to give off-hand the judgment of an honest man; and so my decision is that the tailor lose the making and the labourer the cloth, and that the caps go to the prisoners in the gaol, and let there be no more about it.” (Don Quixote Cervantes) 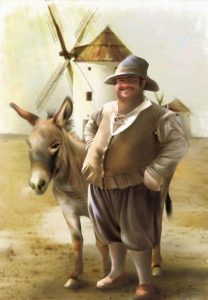 I believe Sancho is an excellent leader. Cervantes is showing multiple things in this chapter. 1.) Sancho has learned a lot from Quixote 2.) The social classes in Spain have many problems and need to be fixed, Sancho being a peasant, and acting wise in charge proves lower class citizens deserve the same chances as the upper class.

This all relates back to the movie documentary, which everything went wrong. Don Quixote doesn’t give up, and continues to influence others. While Sancho doesn’t keep his govern ship since he leaves, he did help people. Cervantes wants us to remain who we are and help the world. Our lives will never be perfect, but we are here on this planet for many years, why not make the best of it and help others in the process?

In chapters thirty-six through forty-five of volume two in Don Quixote, there have been a couple of scenes that have caught my attention. The first scene being Don Quixote giving actual sane and helpful advice to Sancho Panza. The second scene involved Sancho’s refusal to be labeled a Don by those he would govern. For […]