Change and an Identity

One might consider changing your identity to be normal. After all, we aren’t who we were when we were kids, not the same as freshman year of high school, and even just a little bit different than who we were yesterday. As I’ve learned recently in my Anthropology class, change is the only constant. Everything, everyone, everywhere is constantly changing. Indeed, we experience this very change in the novel Don Quixote, where our protagonist undergoes change and embarks in an adventure.

There is, however, a distinction between when someone changes for the better, or for worse. Don Quixote obsessed over chivalry, presumably because of a mid-life crisis. So obsessed was he that *”from his little sleep and considerable reading, his brain dried up and he lost his sanity.” Don Quixote, Miguel de Cervantes, 1605 & 1615. 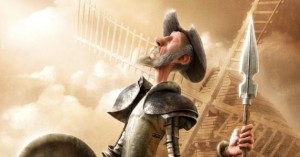 While Don Quixote’s lack of sanity is slightly charming at first, it proves to be an extremely dangerous quality later on; when some muleteers wanted to use the inn’s well, he attacked them. The first, he knocked unconscious. The second had his skull smashed by four raps of don Quixote’s lance. 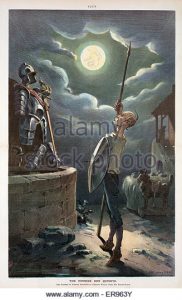 This rears its head again when, on the way home to fetch money and fresh clothing as the inn keeper had bade him, he comes across a farmer whipping a young boy. Through eyes clouded by romanticized chivalry, don Quixote leaves the boy and his employer be, despite pleas from the boy saying that the man was no knight, that he wouldn’t be payed back. 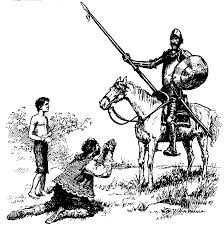 The farmer whips the boy again.

Perhaps it is the difference of the times, but this book was intended to be comedic. I find myself slightly disgusted at such blatant violence and carelessness in what’s supposed to be the protagonist.

This violence rears its head once more when he comes across a caravan of merchants. He asks of them to proclaim the beauty of Dulcinea del Toboso. When they refuse to affirm and confess her supposed beauty, don Quixote threatens them with a fight.

Upon one of the merchants saying, “even if the portrait shows that she’s blind in one eye and from the other she oozes vermilion and sulfur-  to please you, we will say everything in her favor as you wish.” Don Quixote, Miguel de Cervantes, 1605 & 1615, pg 43.

Taking extreme offense to this hypothetical view of Dulcinea del Toboso, don Quixote immediately charges the man, with only fortune in the form of a lean old nag who fell keeping him from running the merchant through.

It goes on, with him convincing a married man to leave everything behind with tales of grandeur, wealth, and power. With this, he acquired his squire, Sancho Panza.

Even after his family and friends attempt to intervene, he still gallivants off to fight giants (windmills). 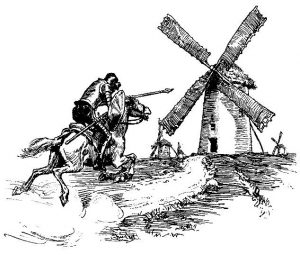 In short, don Quixote’s character change turned him into a dangerous man. Perhaps things will get better as we move along in the book, perhaps they will get worse. As it stands now, he’s a danger to himself (merchants, windmill) and others (muleteers, hired hand).