The beginnings of Don Quixote highlight the misadventures of literature’s favorite almost-knight, don Quixote, showcasing Quixote’s strikingly bold lack of self-awareness, and childlike sense of exploration. But such senses, or lack thereof, hold an odd charm to them – a charm that may entertain and captivate readers and encourage audiences to think beyond conventions, if they so choose.

A Year’s Adventures in One Short Timespan

In a short period of time, our hero manages to literally make his delusions a reality. Quixote was “spurred on by the conviction that the world needed his immediate presence,” (Chapter 1, Part 1) and the world certainly received his immediate presence. Quixote crafts his own suit of armor, finds an adequate companion, Sancho Panza. Panza serves the role of the stereotypical cohort of questionable intelligence who ironically manages to provide Quixote with prolific spurts of inspiration. Quixote runs into individuals from all walks of life – goat herders, tavern wenches, priests, and yes, giant windmills.

Meaning Is Dependent on What We Are Looking For

Don Quixote may be read in multiple ways, but mainly, as a satirical tale of adventure and discovery. Quixote’s adventures are charming to the reader, as we may be apt to feel sympathetic to the haggard Quixote who will stop at nothing to achieve his dreams. We listen to Quixote’s perplexing (and lengthy) commentary on what it means to be a knight, (as if he knew) or codes of chivalry and melee.

Readers in search of more than a plain tale of wit and parody may simply read between the lines to satiate their own thirst, and just like Quixote, add to the story themselves until a satisfying tale is reached. Due to Cervantes’ wit, Don Quixote lends itself to be analyzed in a multitude of ways if a reader so chooses. A searching reader may opt to see Quixote as inspiration for following one’s dreams, crafting one’s own adventure, and paving roads previously unchartered.

Don Quixote is a never ending cosplay, of sorts.

-In which characters are free from conventional stereotypes and boundaries. Even the women, who traditionally either fell into the category of a housewife or a harlot, are seen in different roles. The tavern women of the story are held in higher regard by Quixote, and treated in ways that please them more than the men around them, and Marcela is simply an unmarried woman.

From the past events, all that can be concluded is that Quixote’s adventures will snowball with increasing (but lovable) foolishness. It will be interesting to see how Quixote, if at all, ends his journey. 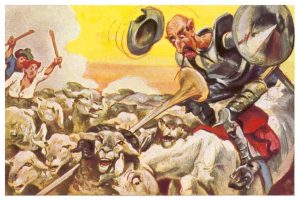