How will I remember Don Quixote from this semester? For me, as time progressed throughout the course, I had a constantly changing opinion of Don Quixote and who he was. Sometimes he came across as a total crazy person to me. Other times I felt that he was someone I should feel pity for, as though he was a decaying middle aged man who almost has a disability. Lastly, I have often seen him in a hero perspective. That is, someone who will always fight for his dream, care for those in need, and most of all speak out against norms in society that can be so detrimental to individuals. This blog post will focus on different episodes throughout the book where I specifically saw Don Quixote in each of these perspectives.
The first episode I will examine is the quite famous one, in which as Don Quixote and Sancho are riding along ‘La Mancha’, they see some windmills and Don Quixote think they are giants whom he must fight.,
“”Look, your grace,” responded Sancho, “those things that you see over there aren’t giants-they’re windmills; and what seems to be arms are the sails that rotate the millstones when they’re turned by the wind.”” -pg. 64 DQ
Despite Sancho’s reasoning with him that they are man made objects, Don Quixote takes off at full speed on his horse, lance out, ready to fight. When he finally gets to the ‘giants’ and tries to drive his lance through what is actually the turning wheel on the windmill, he and his horse are knocked over and almost mortally injured. Throughout this episode it is impossible to look at Don Quixote in any other light than that of a crazy individual. For him to be seeing giants in the place of windmills, I definitely pictured him as someone who had lost the bolts in his head.
The next episode is one in which I had no choice but to view Don Quixote with complete pity. This is the episode in which the Duke and Duchess convince Don Quixote that he must ride a ‘magical’ wooden horse on an adventure in order to free dulcinea. With the help of tools such as torches and fans, the Duke and Duchess make Don Quixote and Sancho believe that they are really flying in the clouds. Throughout this ‘ride’, the duke and duchess laughed and mocked the two, making them look like complete idiots. As I read through this episode, I felt horrible for Don Quixote. He came across to me as a helpless, and disillusioned older man.
Lastly, the way that I have viewed Don Quixote most often and will go away from this class with this image, is him as a hero. So many times throughout the novel, Quixote shows us his good intentions, wise words, and a wish to make the world he lives in a little better. The episode that I think most represents this Quixote is when he defends Marcela , the shepherdess, even though the whole town is against her. The people had believed it to be her fault that Grisostomo had died because he was so in love with her. Don Quixote defends her, stating that she should be free to live life as she chooses. “” Let no one whatsoever dare to pursue the beautiful Marcela, under the penalty of incurring my furious wrath. She’s shown with clear words and solid reasons that she has had little or no blame in the death of Grisotomo, and how distant she is from yielding to the desires of any of her suitors. Far from being pursued, she should be honored and revered by all good people in the world, since she shows that she’s the only person who lives by such virtuous intentions.”” – pg. 113 DQ
Don Quixote stands by his ‘knighthood’ beliefs that all should have justice and this is how I shall remember him the most. 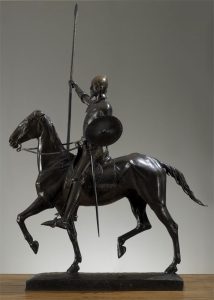