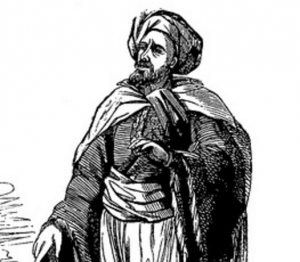 Cide Hamete Benengeli is the fictional Moorish figure listed as the author of Don Quixote’s misadventures. Cide’s name itself is wholly whimsical, as “Cide” translates to “My Lord,” “Hamete” translates to the Arabic word for “he who praises,” and “Benegeli” is a term made up by Cervantes suggesting one who eats eggplant, a then popular food of the people of Toledo.

Cide Hamete has been said to be “one of the most effective of the multiple masks of Cervantes,” as by creating a fictional author, Cervantes grants himself increased literary freedom to take risks and “make mistakes” in his works. In addition, the existence of a partially reliable Moorish author serves to showcase the cultural tensions between the Spanish and Arabs, such as in the case of the Spanish-Ottoman rivalries.