As I said in my first blog (Benjamin’s blog 1) Don Quixote (The person) has some negative aspects. But I failed to realize that I was only taking into account the negative aspects. You can’y just ignore the good and only see the bad, but now we see the whole picture of Don Quixote and maybe determine if his the knight in shining armor, or the freak that  ruined everyone’s life.

You can breakdown Don Quixote’s heroism (or villainy) by looking at the choices he makes. We have his action, his intentions, and the consequences of his actions, and surprisingly, Don Quixote follows a good pattern.

The first blog showed a lot of negative actions(friars, windmills, Basque) and almost all them had a negative impact on somebody (Sancho being beaten, Don Quixote and Rocinante being injured by windmills), but were Don Quixote’s intentions good or evil? I believe his intentions were good, because he was clueless. He insulted everyone because he was clueless, but evil or mean. Don Quixote had the right idea, the idea that he should save people from enchanters, and giants, it’s just the right thing at the wrong time.

But what about after chapter eight? In chapter eighteen “… he saw… two large flocks of ewes and rams.. that Don Quixote insisted so fervently they they were armies” (Grossman). What does he do? After a long conversation with the shepherds about hearing drums or hearing “bleating of lots of sheep” (Grossman) “he rode into the midst of sheep and began to run at them with his lance 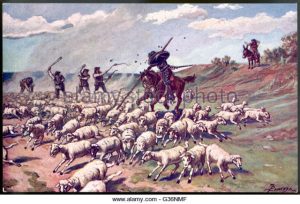 as fearlessly and courageously as if he really were attacking his mortal enemies” (Grossman). What the consequence: ” a small round pebble came flying and hit him in the side, entombing two ribs inside his body… but before he had finished swallowing a sufficient quantity (of his potion), another almond came flying and hit his his hand” Grossman). This example also shows Don Quixote’s good intention, bad action, and worse consequence.

Another example is on chapter fifteen showing Rocinante being hurt by the female ponies, and Don Quixiote thinking it was the Yanguesans fault. Don Quixote rushes to attack the Yunguesans and to save Rocinante but ends up getting hurt, and while the intention was not as obviously as the sheep, Don Quixote’s intentions were still good; he was trying to save Rocinante, the problem was how Don Quixote attempted to fix to. The problem is, there really wasn’t a problem in the first place, yes Rocinante did get injured by the best thing to do was to bandage and let Rocinante heal.

This opens the gap a lot; Don Quixote’s intentions were good, but they were also unnecessary. None of the problems were really problem; the giants, the friars, the sheep, nothing. So the notion that Don Quixote is a hero or not is determined if the overall good intentions compensated more than the fact that he is unwanted and is just causing trouble. My opinions is that Don Quixote is more good than bad because of two things: one, Don Quixote may be unwanted and unnecessary, but he’s really not bad. He’s trying and that’s something, even if it leads to certain danger. Two, Don Quixote should not be taken at face value. He believes enchanter exist just like we believe in Santa, or Tooth Fairy (through that opens another discussion about immature imaginations). Don Quixote believes, and believing is something we need a bit more in this society.