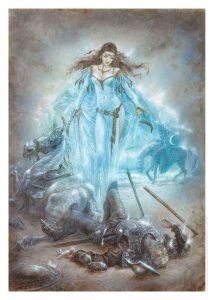 Throughout the pages of Don Quixote, I’ve come across various interactions between the don and women. The fine line between chivalry and misogyny truly starts with his abject failure to gather Aldonza Lorenzo’s consent to do violence in her name.

Not only does don Quixote commit villainous acts in her name, he also objectifies her and completely overwrites her character by renaming her Dulcinea del Toboso and espouses traits of beauty that she does not possess. This is all compounded by him using that very objectification to then make excuse to attack others. Back when he charged the merchants for an imagined slight comes to mind.

This line wavers happens again, with his objectification of the prostitutes (though that was comparatively harmless).

And again when he attempts to ‘save’ a lady from ‘enchanters.’

What truly bothers me most, I think, is that this persistent fallacious chivalry has already endangered many. Don Quixote doesn’t exhibit chivalry, merely asserting his morals upon others, and upon his own misogynistic views of women, he objectifies them, demeans them, and endangers others in doing so.

Now, the book takes an interesting turn with the events of Grisostomo’s death and Marcela’s frankly audacious bravery. 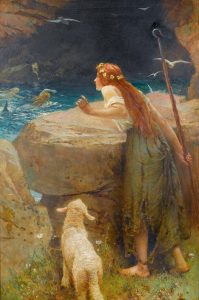 Here we see a break from the usual litany of women left behind, and objectified. In fact, Marcela outright calls the men upon their actions.

I shan’t outright quote the entirety of her speech, eloquent though it was but here’s an excerpt that really captures the meaning from which I’ve derived for this post:

“…But what I don’t understand is that just because a woman is loved because of her beauty, she’s obliged to reciprocate this beauty. And furthermore, it could happen that the one who loves the beautiful woman is himself ugly, and since ugliness is worthy of being despised, it would be silly for him to say: ‘I love you because you’re beautiful; now you must love me, even though I’m ugly…'” Don Quixote, Miguel de Cervantes, 1605 & 1615, Chapter XIV.

Her speech is incredibly beautiful and moving, powerful and radical. Marcelena is a unique wonder among women of that time for her boldness, her self-worth, and the way she respects and stands up for herself.

However, this is something that we see as readers, not something that really affects the other characters of the books, not even don Quixote, a supposed knight lead by chivalry.

The book highlights this misogynistic view of the time very clearly in the following:

“… leaving everyone there astonished, as much by her mental acuity as by her beauty. Some of those who were wounded by the mighty arrow from the rays of her eyes looked like they wanted to follow her, without heeding the very clear admonition they’d heard.

When don Quixote saw this, it seemed to him that there was a good place to use his chivalry to rescue needy damsels in distress…” Don Quixote, Miguel de Cervantes, 1605 & 1615, Chapter XIV.

Chivalry or misogyny? While I got carried away with how the book portrayed Marcelena so beautifully, let’s go back to don Quixote the character, and our question.

As my last quote showed (rather adequately in my opinion), don Quixote the character remains unmoved by the fierce independence displayed by Marcelena. Once again he demeans her, calling her a ‘needy damsel’ and using chivalry to justify this.

I believe that the don’s words don’t match his actions and thoughts. He dresses it up nicely with chivalry and pretty words, but going all the way down to the root of his actions, they are all based on the very discriminatory and prejudiced idealisms of the time.